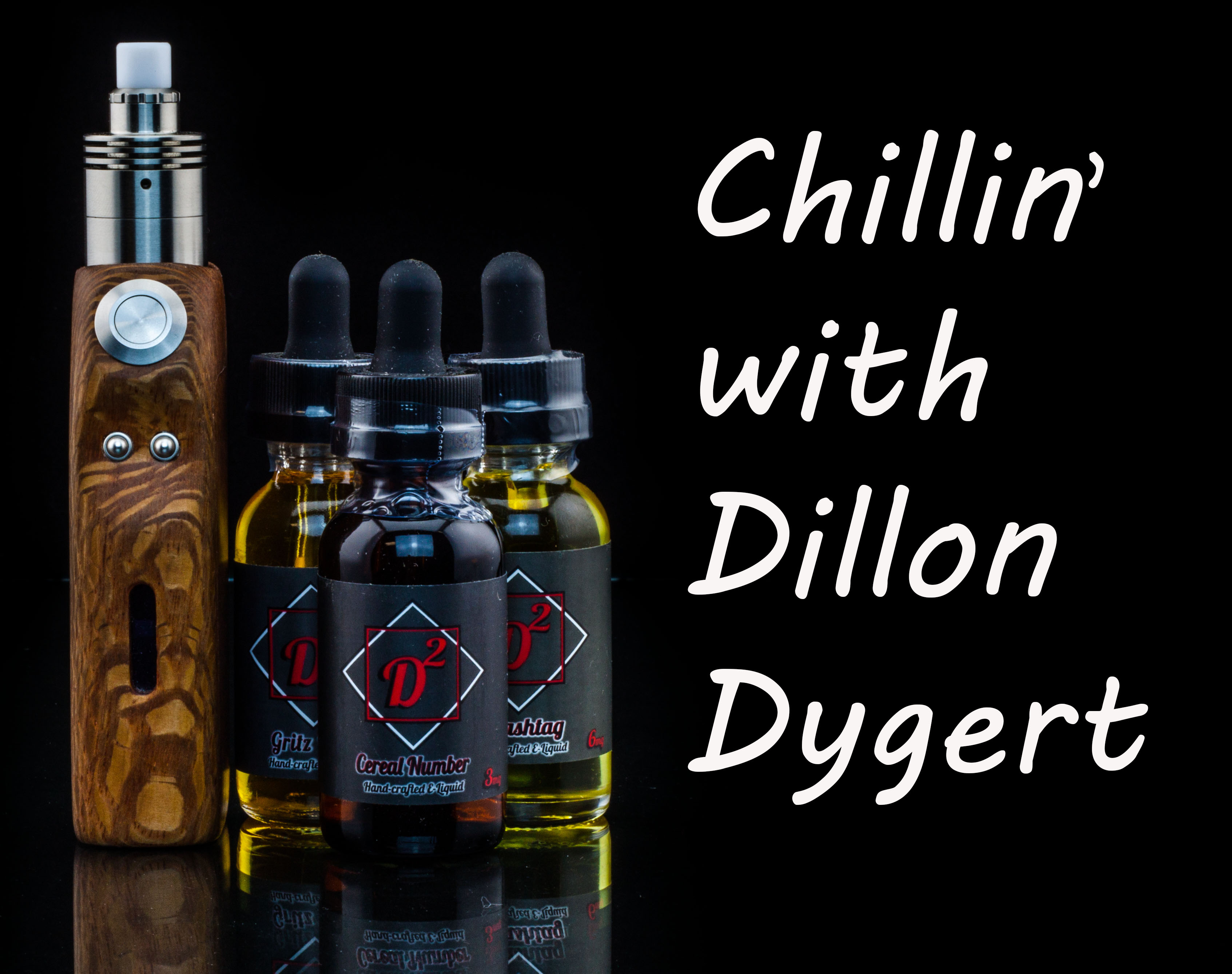 D² E-Liquid was created by Dillon Dygert with a small investment, a professionalism for sales, savvy social media tactics, and selective business networking. With that he was able to create a well respected brand in the vape industry. Based out of Southern California, we get a few words from the Boss himself! 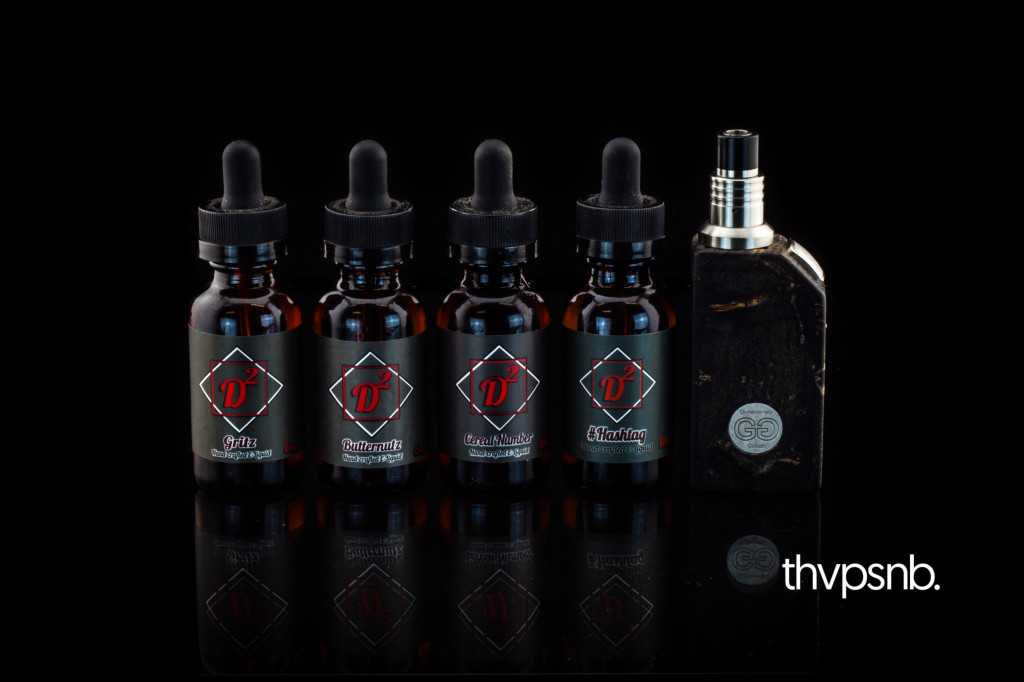 Tell us a little bit about D² E-Liquid  and the people involved. How have you built your brand? Where can we find D² E-Liquid?

Dillon: D² E-Liquid was created to perfect the craft of Bakery/Pastry/Desert style flavors, which were few & far between during the genesis of the company. Originally, we were focused on layering flavors to specifically interact with different temperatures and focused on mesh/rebuildable tank style atomizers…truly for the vape connoisseur.  The brand was built relatively slowly and organically through networking and establishing relationships in the Facebook vape community.  Group buys, shout outs, “hype”, buzz, were all key roles in the successful launch and initial growth of the company.  Recent growth of the company has been incurred from implementing professional sales teams, graphic design, multimedia teams, and exhibit coordinators.  D² E-Liquid can be found at hundreds of Retail locations across the United States, and dozens abroad, all of which can be located on our retail partner map at www.d2eliquid.com 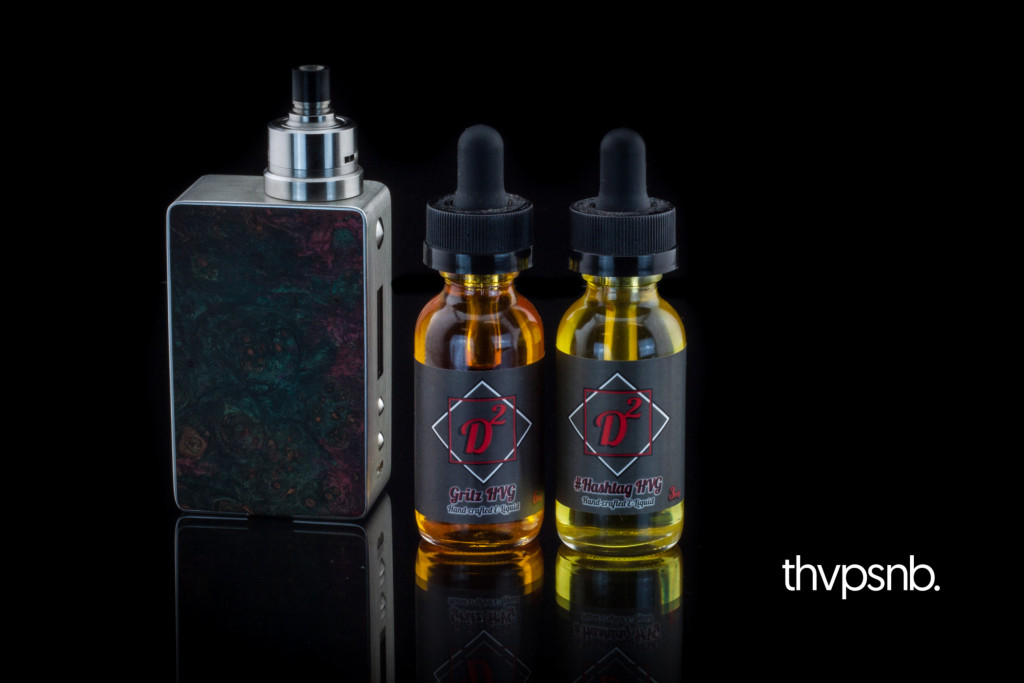 What’s the inspiration with D² E-Liquid line?
Dillon: I got into vaping through seeing some friends of mine vape, and thought it tasted awesome and could help me cut back on smoking a bit. Within a month I no longer smoked cigarettes.  a little more than a year later, my friend Nick Gollust, now owner of Nick’s Blissful Brews, added me to a few Facebook groups and got me involved in the core vaping community.  At the time they were called “elitists” but they showed me love and embraced me, and it began the journey of my career and complete change in lifestyle…
Who have been your biggest supporters thus far?
Dillon: My biggest supporter has definitely been my beautiful girlfriend (soon to be Fiancé) Joyce. She has stuck by me through tremendous peaks and valleys over that past 3 years and watched me and D² grow by leaps and bounds.  The origin of the company began on her kitchen counter, and shortly thereafter consumed the entirety of her apartments before we moved into a legitimate facility.  D² would not exist without her unconditional love and support. 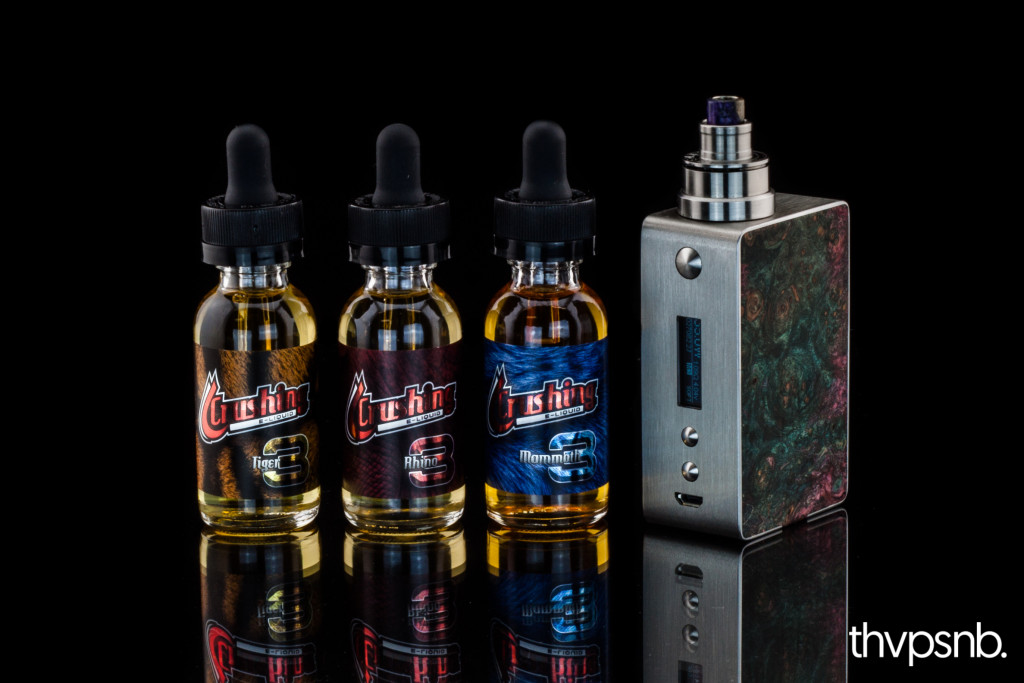 What upcoming releases, projects, or events are you working on?
Dillon: Upcoming release: Crushing E-Liquid was recently launched for the debut release at Vape Summit III In Las Vegas, NV on May 1st.  We have experienced overwhelmingly positive feedback from the industry thus far such as winning “Best In Class” for creams, vanillas, and custards (over 550 entries) for our flavor Rhino – A vanilla bean frozen yogurt infused with pistachio swirl.  We will be releasing the 4th flavor in the Crushing E-Liquid lineup later this summer 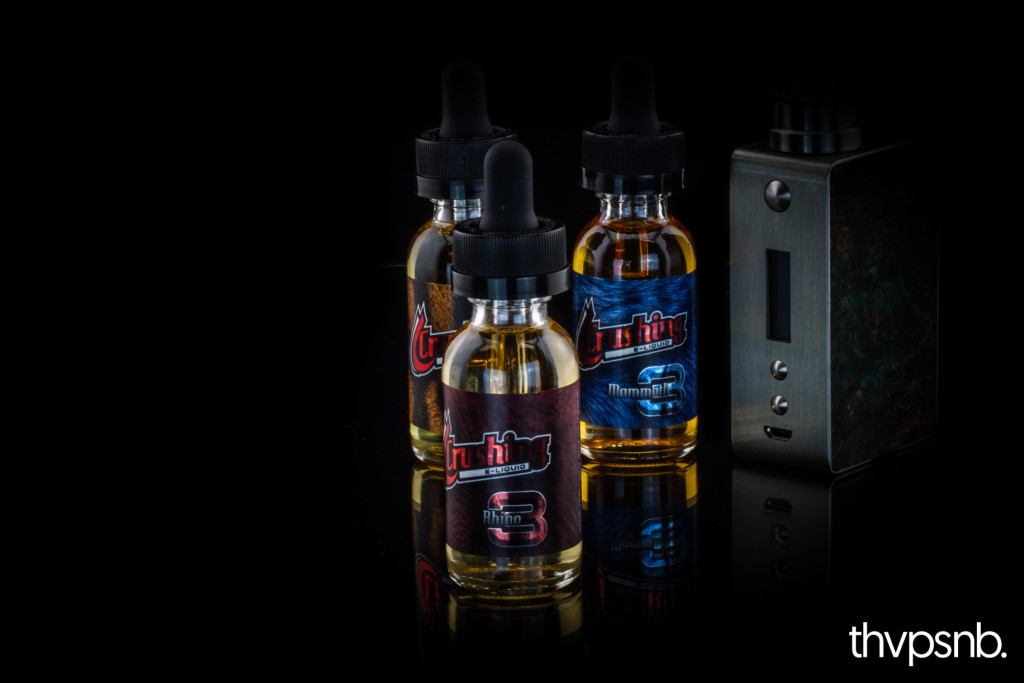 What are some of your favorite personal vaping setups?
Dillon: My favorite personal setup is undoubtedly my Zero Xtreme and my SX Zero prototype.  Both are flawless in craftsmanship and precision and absolutely beautiful pieces of art.  My Hexohm/stillare v2i is definitely my daily because it just works and does exactly what it’s supposed to do without the worries of dropping or damaging the mod itself.  Some would call it a “beater” I prefer “Ol’ Faithful” 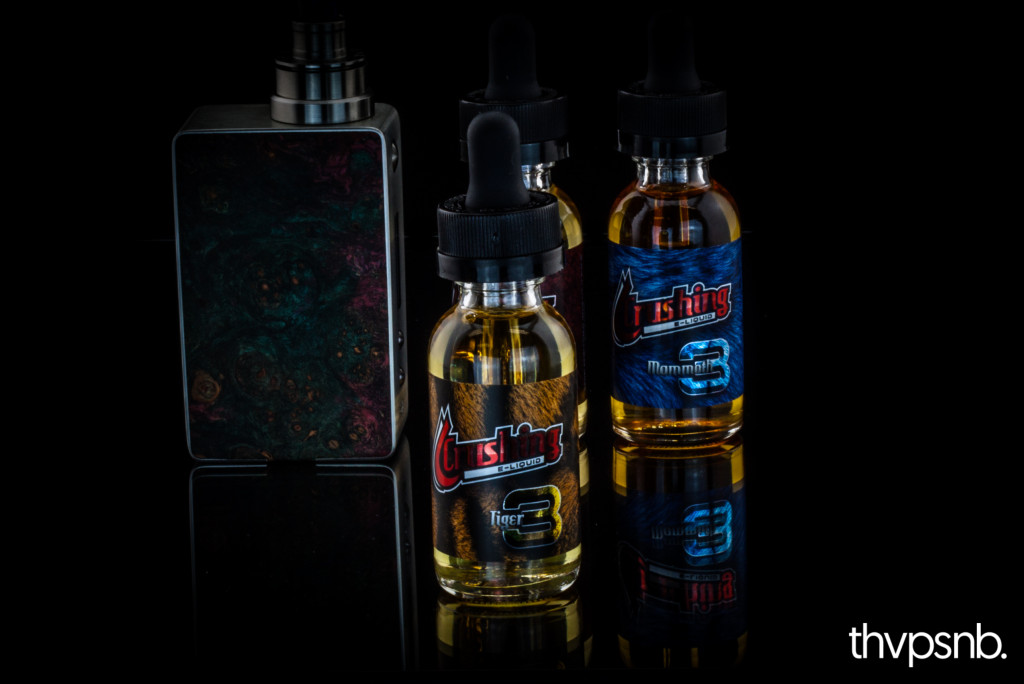 Dogs or cats?
Dillon: Definitely prefer dogs.  My American Bully named Goober comes to work with me every day. 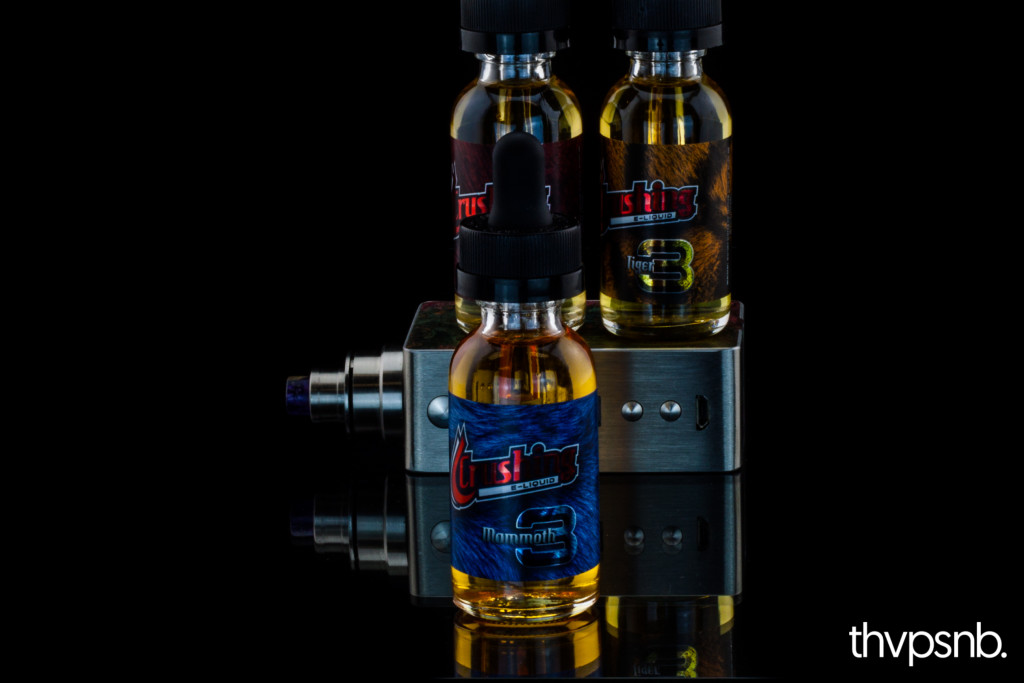 What are some of your favorite E-Liquids brands and flavors?
Dillon: Favorite E-Liquids, not in any specific order, would have to be SMAX (Sammie Puffs), 5 Pawns (Castle Long Reserve), Teleos (Crunch) to name a few.
What are your plans for the future?
Dillon: We have lots planned for the near future.  Not at liberty to discuss all of them right now, but we will be coming out with a number of new product lines, flavors, and some other stuff outside of the vaping industry as well.
Vape and hobbies are often tied together…What hobbies are grabbing your attention right now?
Dillon: I’ve always been a huge film buff, and actually majored in Cinematography at the Art Institute of California, so film-making and film history have always been a hobby of mine.  Art collection has always been a big interest of mine but recently I’ve been getting more involved and educated in the art world…specifically street art, pop art, and monochrome. 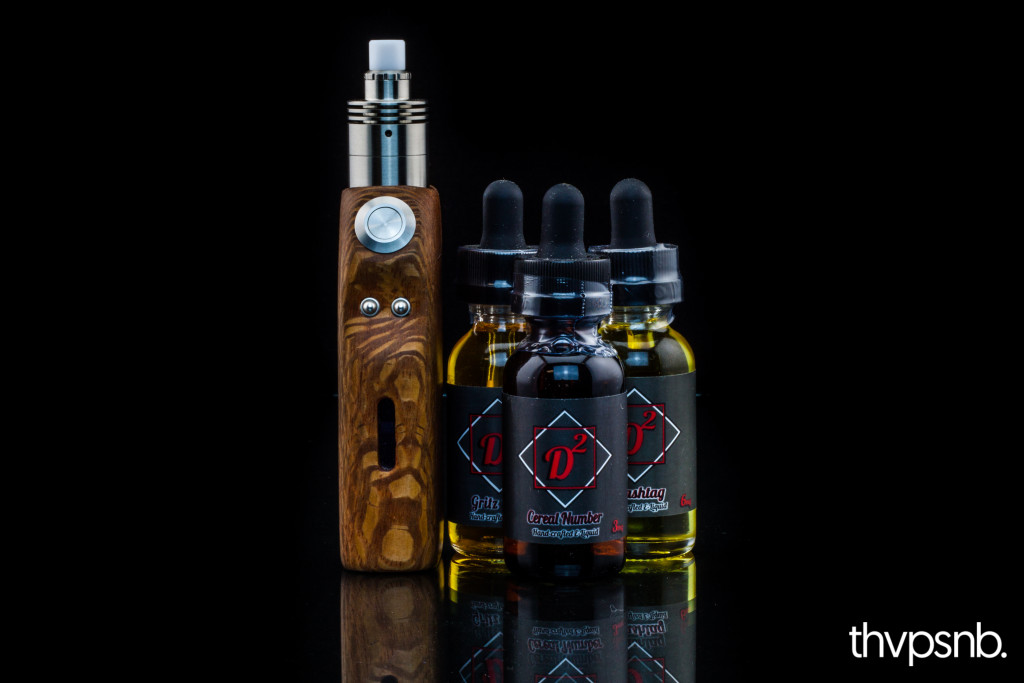 Where can we find more on D² and Crushing?
Dillon:
facebook.com/Dsquaredeliquid
instagram.com/dsquaredeliquid/
d2eliquid.com/
Sales@d2eliquid.com
Sales@crushingeliquid.com
Thanks for taking the time to speak with us Dillon, do you have any last words or shout-outs?
Dillon: Definitely wanna give a shoutout to all of our fans and supporters around the world.  Every time we get an email or DM (direct message) from someone saying they just tried one of our flavors that they can’t stop vaping, it makes it all worthwhile.  It’s the reason I do what I do.