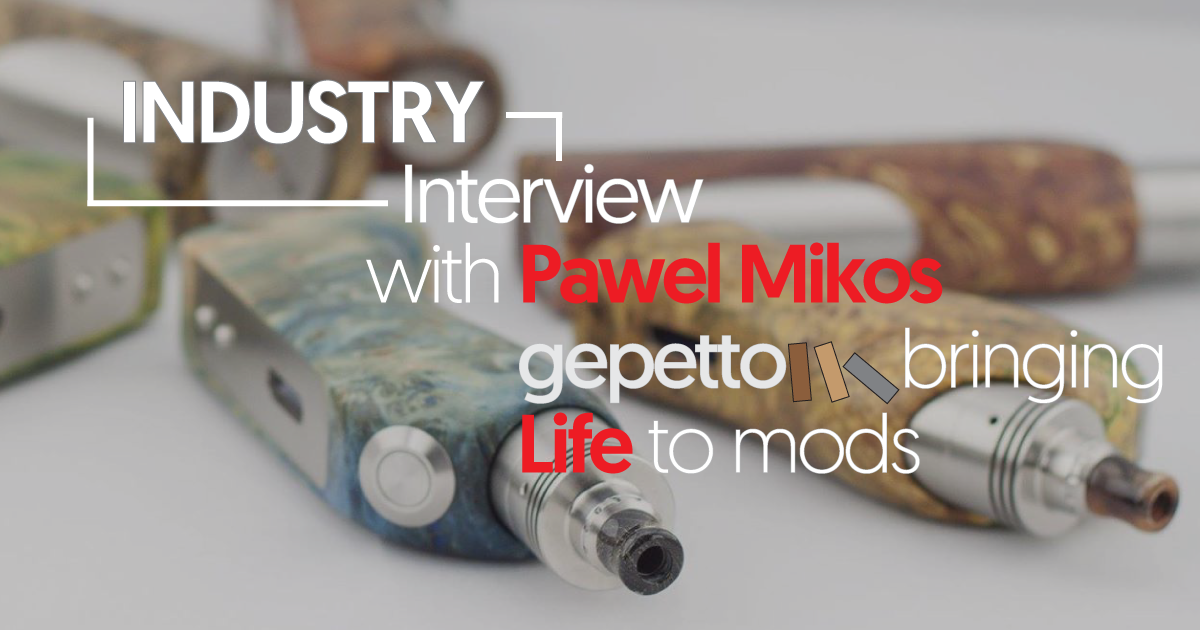 Gepetto ModsHigh End ModsINTERVIEWS
Please introduce yourself, can you tell us how you started?
Hello. My name is Paweł, I’m one of the Polish modders and I’ve been doing this for the past … 4 years or so. I`ve started really small in 2011 and just kept doing what I`m doing.
I’ve started out of necessity to be honest – at some point I was working construction and in between seasons, I just had to find something to do. I`ve made a few simple boxes, people said they liked them and asked me to make them some … and so it started… so to speak. I`ve made some mods for my local market, slowly tried my luck with ECF, expanded to VapePit and Vapor Wall … then came Facebook and here we are.
I’ve never worked with wood before that, so it was a learning experience all the way.  Had to learn how to carve wood and how to turn it – it’s been a fun journey to say the least. 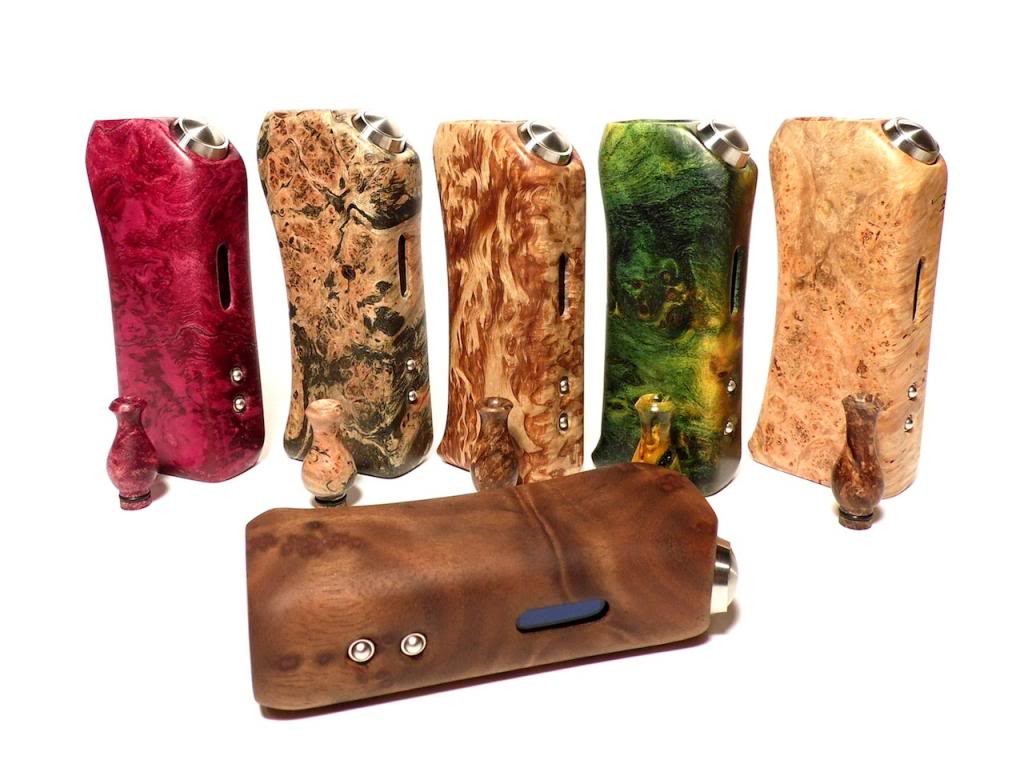 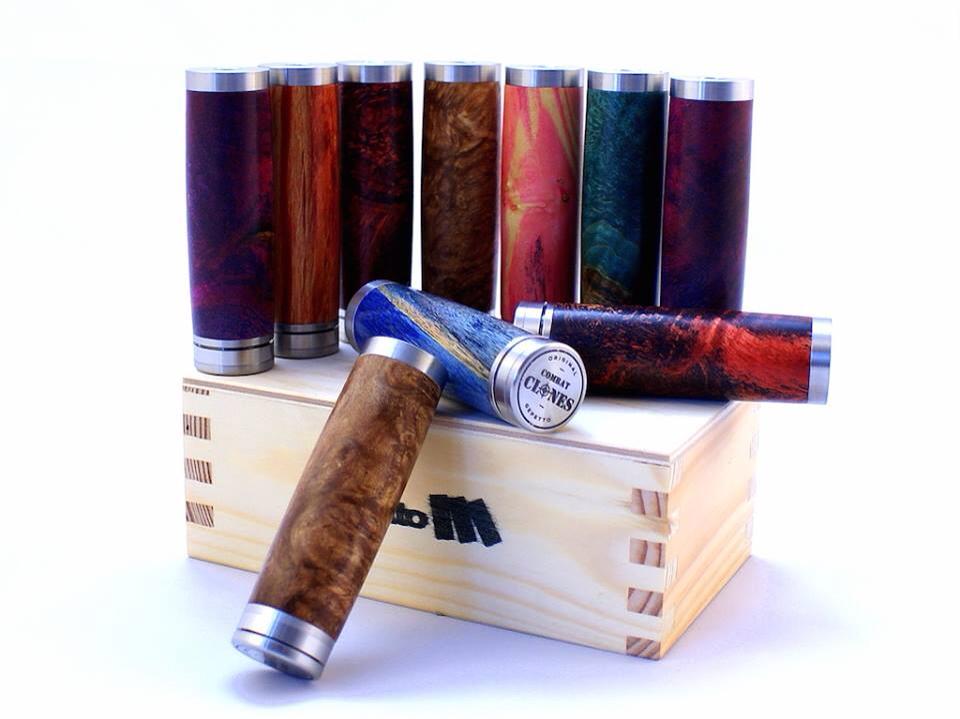 Knowing what your mods go for in the market, what makes you so humble and grounded?
I don’t really know…It feels good to know that my mods are coveted, but at the same time I am aware of the fact that this might change at some point. The market is not very stable unfortunately and what is on top one day might serve as a paperweight next week. I still don’t think that my products are “perfect”…I’m constantly trying to make some minor adjustments here and there. I know that there are people out there that are better at woodworking than I am, more proficient at soldering, have access to more sophisticated materials and so on. I think that it’s this drive to be better and to improve my mods that keeps me humble and grounded as you call it. To be completely honest, I’m just trying to come up with a mod that I will be 100% satisfied with.
As far as market value goes…I used to be against “flipping” as we call it, but that’s not something that is limited to this market. This is common in the high end watch community and what we have with vape gear is nothing in comparison with knives and other collectibles. Again, to be completely honest, it is humbling to see that people are willing to pay this or that amount of money for the items I have made. It makes me proud of my work and at the same time it motivates me to work even harder. 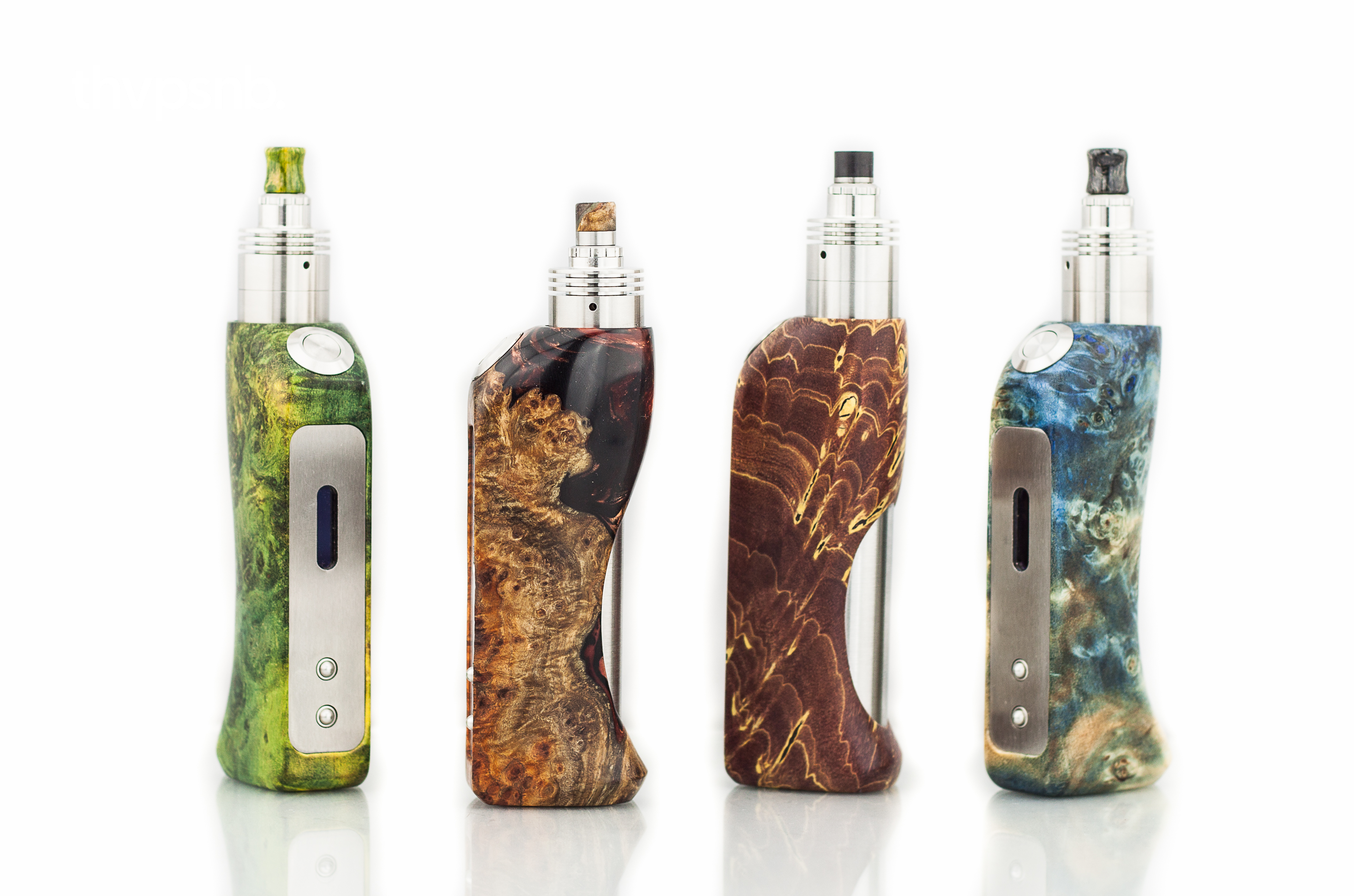 What are some of your inspirations when creating S.L.A.P?
Depends on the day, but it is usually one of the horror movies that I have watched recently. I’m a horror movie fan as you can probably tell from the slaps that came out in the past. Some of them were commissioned and I tried to put my spin on the ideas I was given. Apart from that it’s the music…I always have some AC/DC, Iron Maiden or Led Zeppelin playing in my workshop while I’m working. 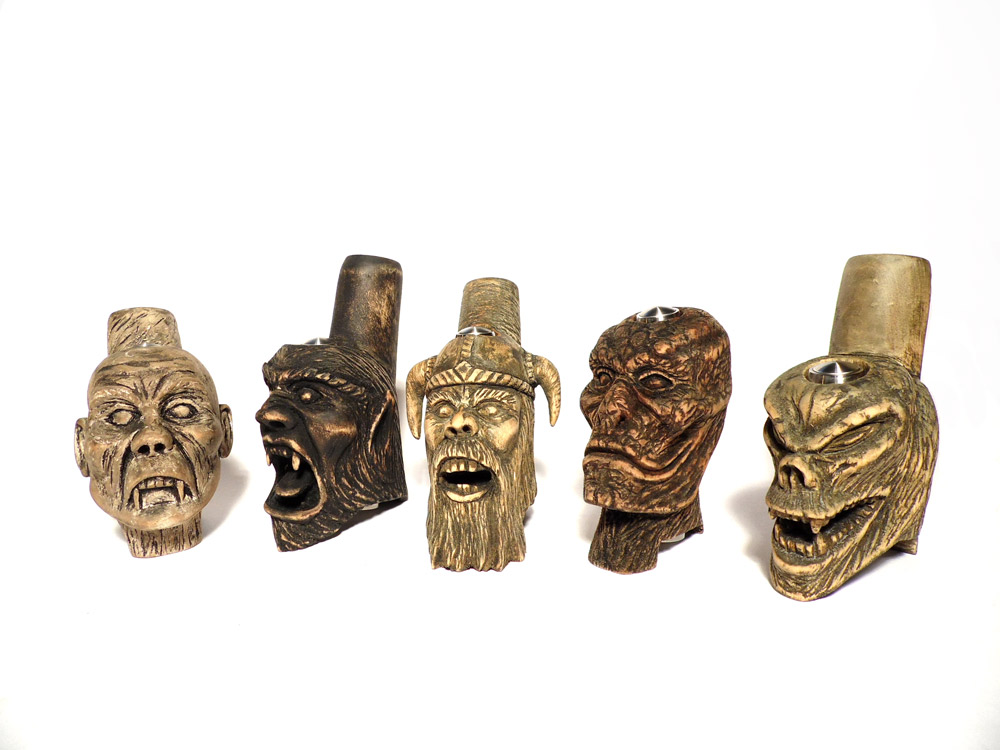 What was the idea behind the V3?

Elite V3 is a product of minor tweaks over the past few months. I was really happy with the way V2s came out, but I knew I could make it even better. V3 is just a tiny bit shorter, but it seems to make a huge difference. Also I wanted to limit the amount of contact that the wood has with e-liquid. While stabilized wood is protected against liquids and so on, it is not impervious and continued exposure to e-liquid might cause some discoloration. 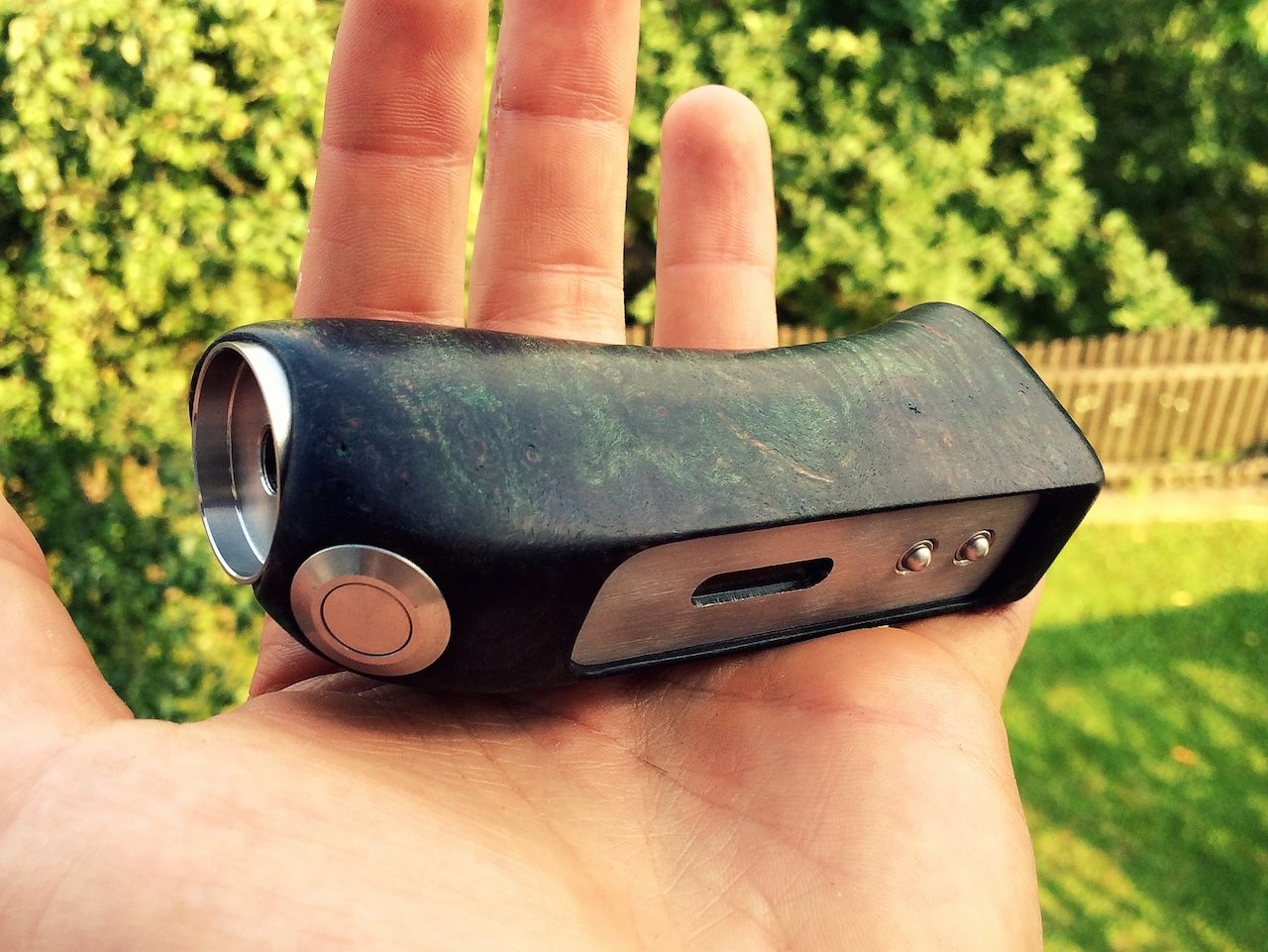 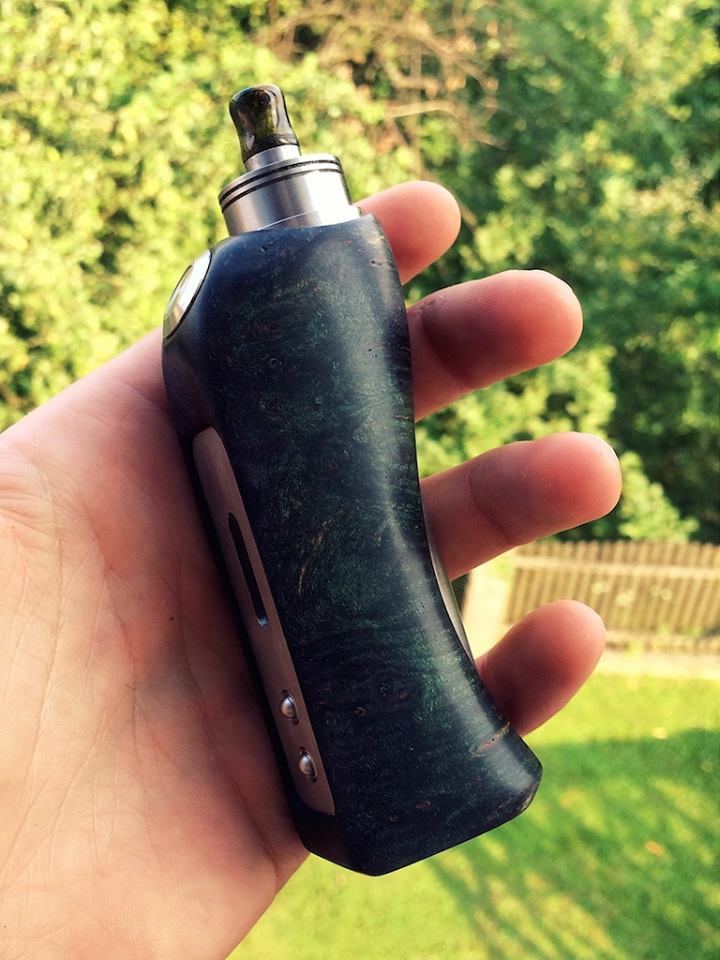 What upcoming releases, projects, or events are you working on?
Events are a tough one. I’m a family man first and foremost and going away for a week or so is not easy for me. But this year I will attend Vape Summit Houston for sure. As far as other shows go – I might be represented at other events too. We shall see how it goes. VS Las Vegas was my first show and I had a blast. In my opinion the whole gallery idea was great and I can’t thank people that reached out to me to attend the last show enough.
Releases … Last summit I released the Flo. At ECC. We unveiled the OverFlo, the 26650 version. This time? We shall see. It’s too soon so I don`t want to spoil the surprise.
As for upcoming releases … That’s an awful question! I don’t want to spill for now. It’s mostly because I’ve got some things in the works, but hard to tell what will make it past the prototype stages. I mean there are some interesting chips out there. The form can be worked on. I haven’t done enough squonkers and that’s something I’ve been exploring … only time will tell. But no worries, I’ll keep the Vape Snobs informed. 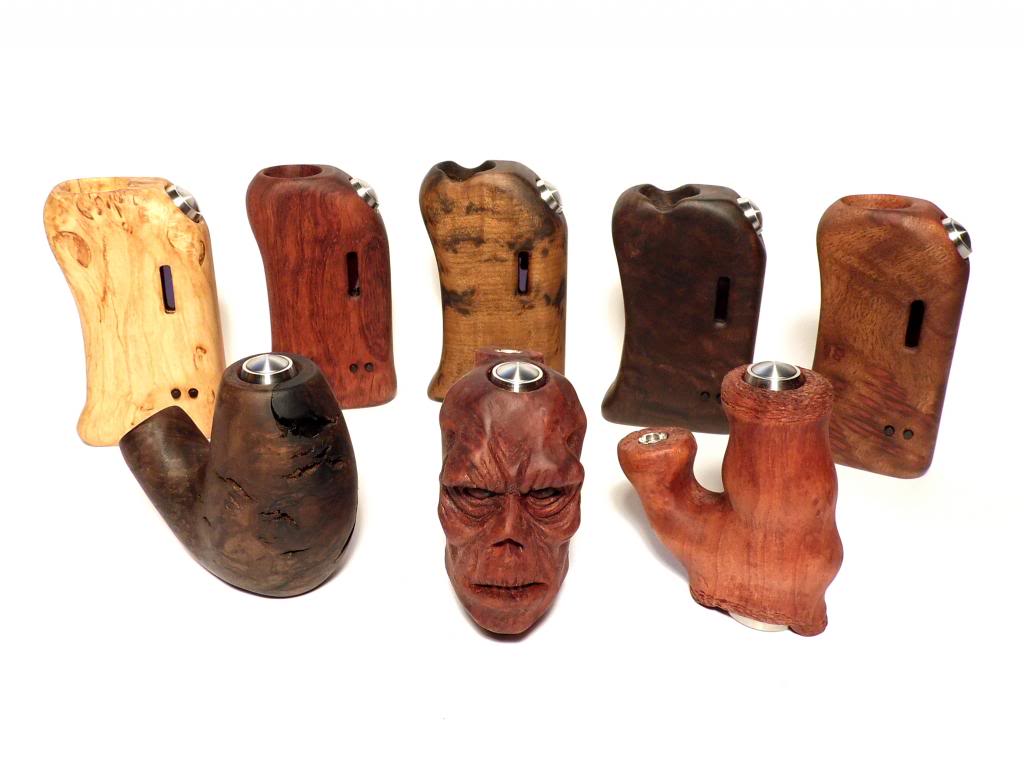 You’ve have done the P jelly, hybrids, and various stabilized woods, are there any other materials you plan on working with? Also, what is your favorite material to work with?
Favorite material would be just “regular” stabilized wood. Hybrids are a bit more difficult, typical resin casts are a bit rough when it comes to aftercare – so I would say either good quality wood or stabilized wood.
As far as materials go I’m not sure. I try to use anything that catches my eye. I will be experimenting with some other metals for metal parts, maybe some exotic hardwood, maybe some new resins … 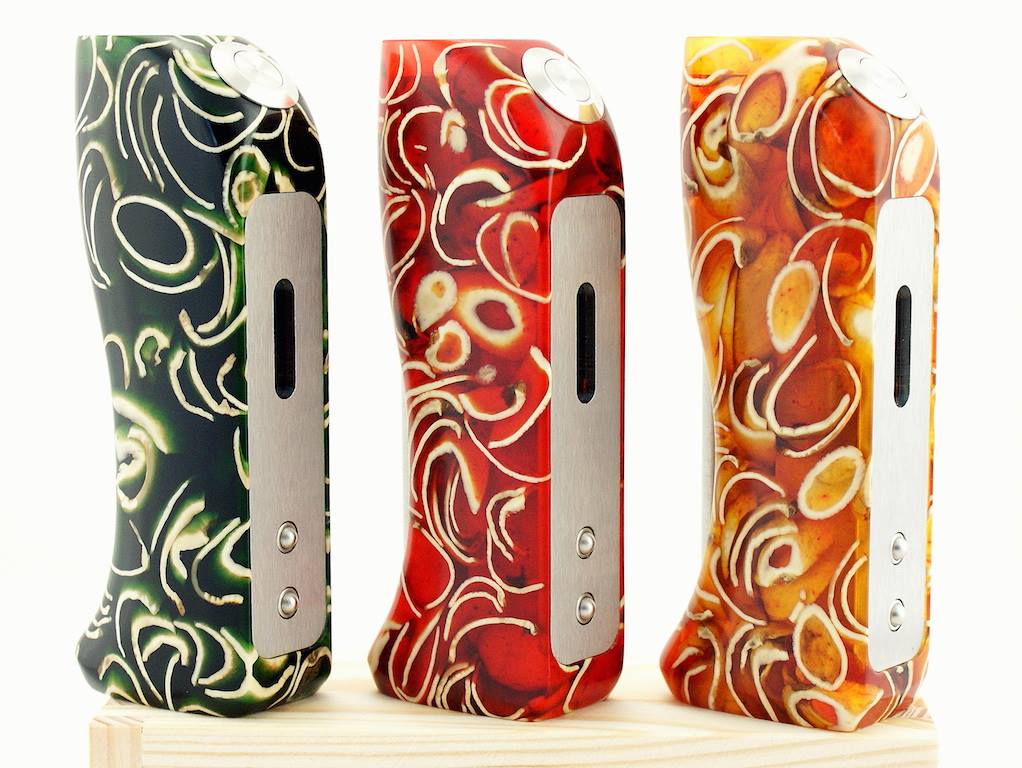 Favorite E-Liquid brands?
This changes from time to time. I tend to go hard on a flavor/company and burn out at some point, but lately it’s been 5 Pawns, Cashmere and Teleos just to name a few. I love Mad Murdock’s stuff every now and again, but in general I’m a tobacco vaper. I can’t do fruity flavors for a long time but can go through 120ml of Grandmaster or Houndstooth in a week. Also Decadence by Dark Berry was a nice addition to my rotation. 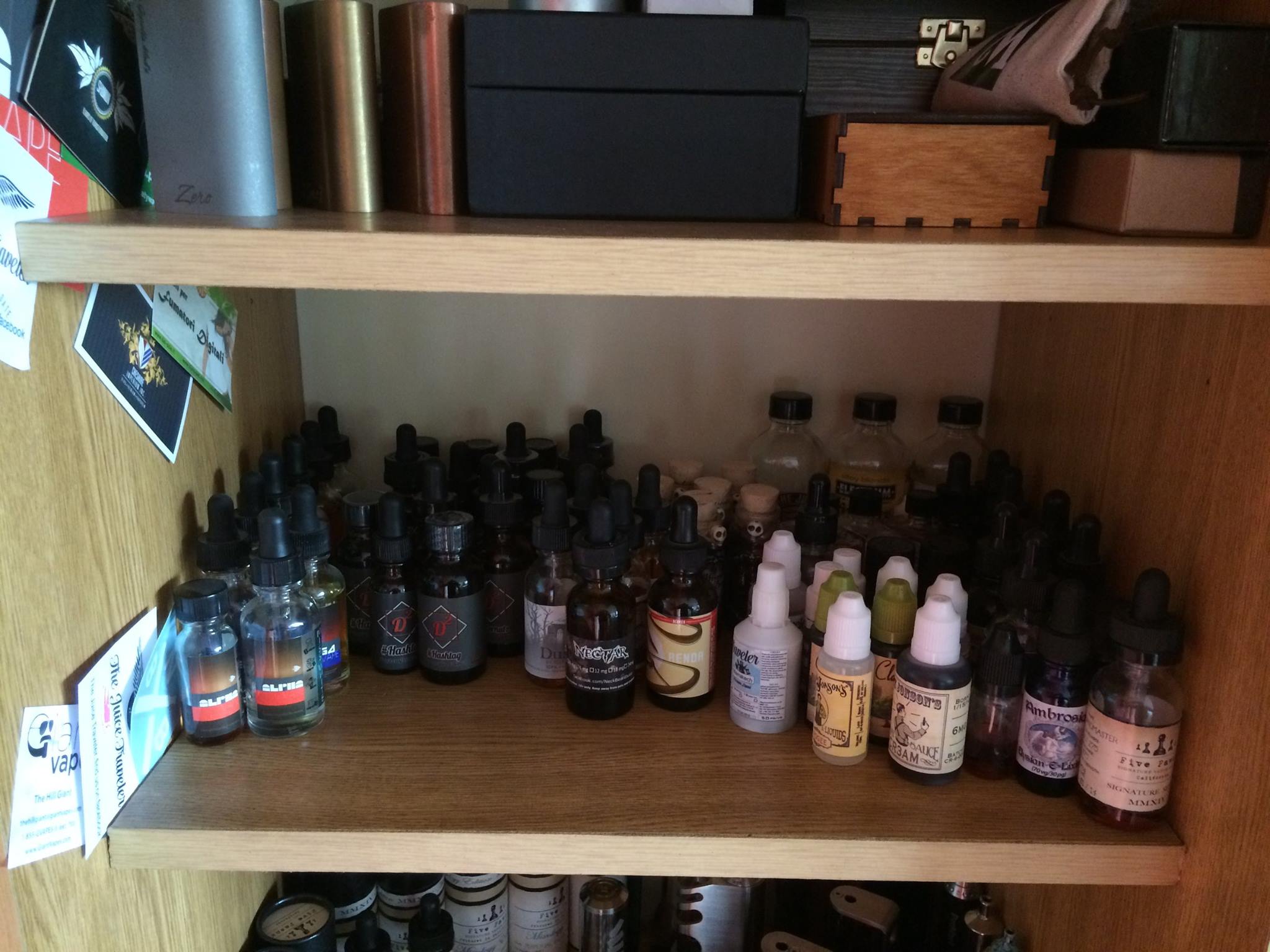 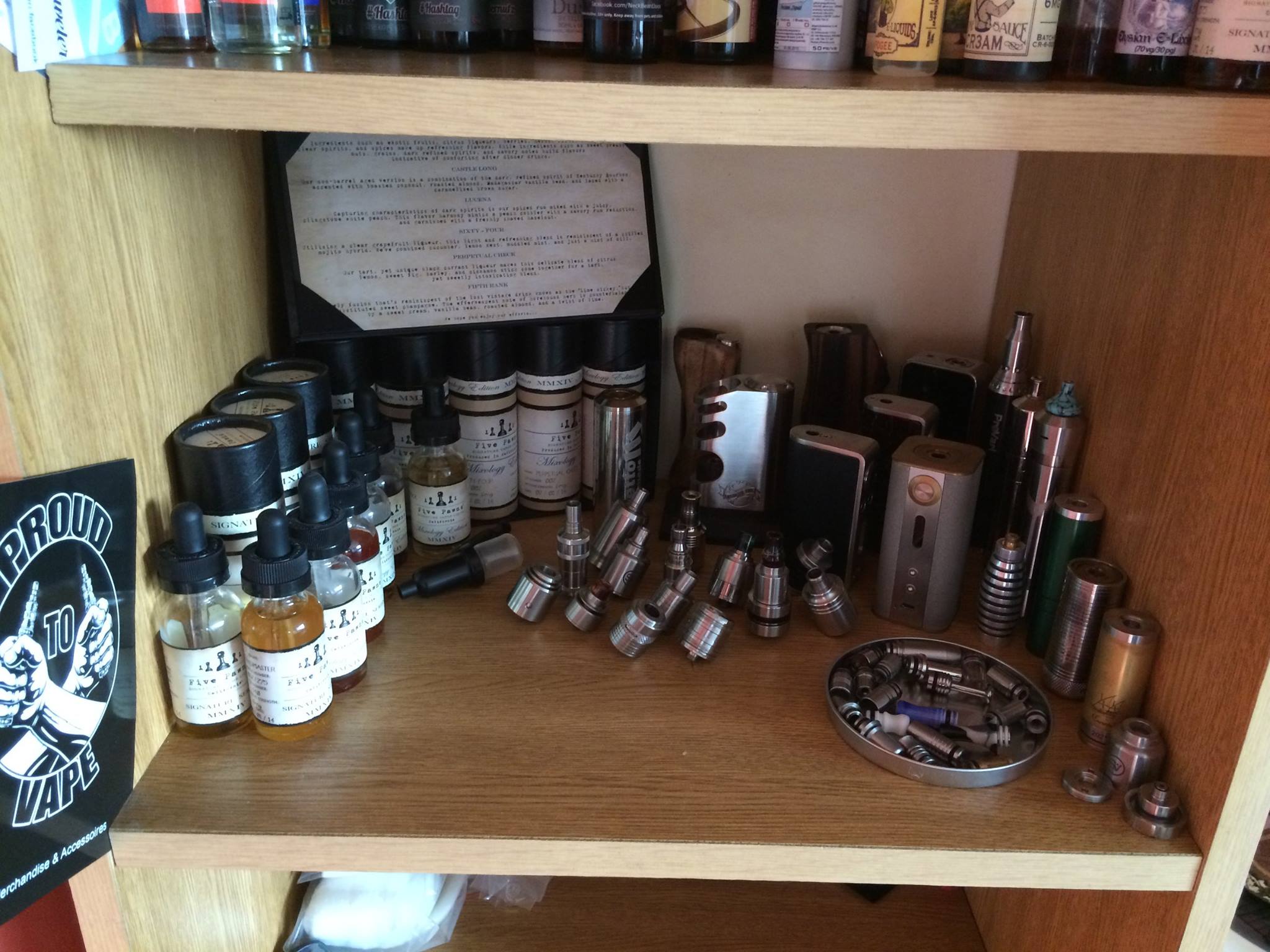 What are some of your favorite mods and atomizers from other modders?
At the moment I`m using the Le Magister as my atty of choice. It’s either that, an Origenny, In’ax or a simple Kayfun or Squape.
Mods wise, I mostly use my mods. Not out of vanity or anything like that…I have to test each and every device I make for a few days, so I get to constantly rotate mods.
As far as modders that I like and whose work I admire ? Just to name a few, we have the people behind the Billet Box, Stickman, Lautus Creations… but to make the list simpler and less “exclusive”, I admire anyone who’s trying to innovate. People who strive to make something just a little bit different, people who put thought into their devices. In my opinion ergonomics and functionality are extremely important. Most of us go everywhere with our devices, so they need to be comfortable to use. 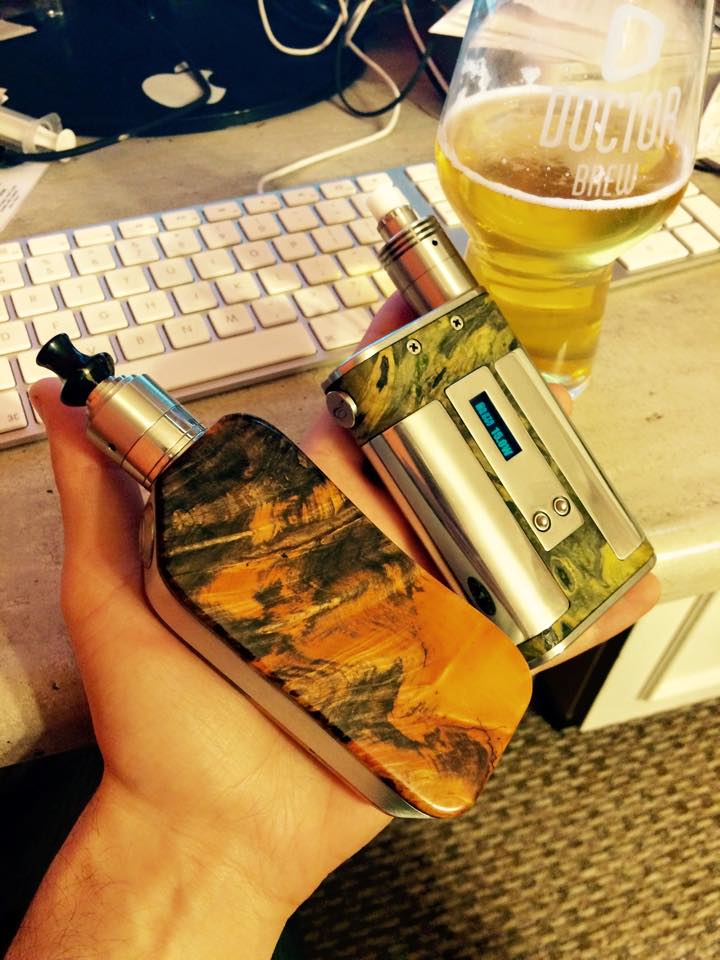 Do you have other hobbies besides vaping?
I used to have way more hobbies before my son came to this world. I still try to brew my own beer, as I’m a beer enthusiast. I play a little bit of football (or soccer as you people call it). Watching a good movie while having a good beer is one of my favorite ways to relax after a long day. 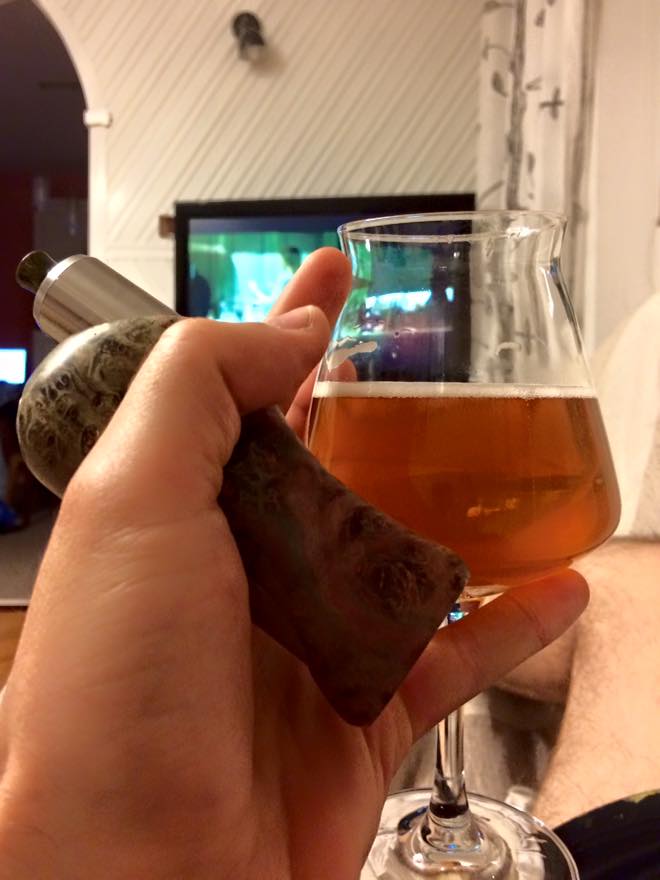 How do you feel about the DNA200? Will we see that incorporated anytime soon with Gepetto Box Mods?
The chip seems solid. The size is a bit of a concern to me. Time will tell. There might be something in the works…as soon as I come up with a shape that I’m comfortable with.

What parts are made in house?
I do all the woodwork and soldering in house. The whole finishing process is done by hand and I’m trying to pay as much attention to detail as possible. All the metal parts (apart from buttons) are outsourced – I get them from a company here in Poland and they do a good job in my opinion. Buttons that I use are just Mitec switches for now, but I’m hoping to get these custom made too. I wanted to move away from all the mass produced e-cig parts made in China, because at the very beginning the connectors were giving me the most problems when it came down to repairs and replacements. 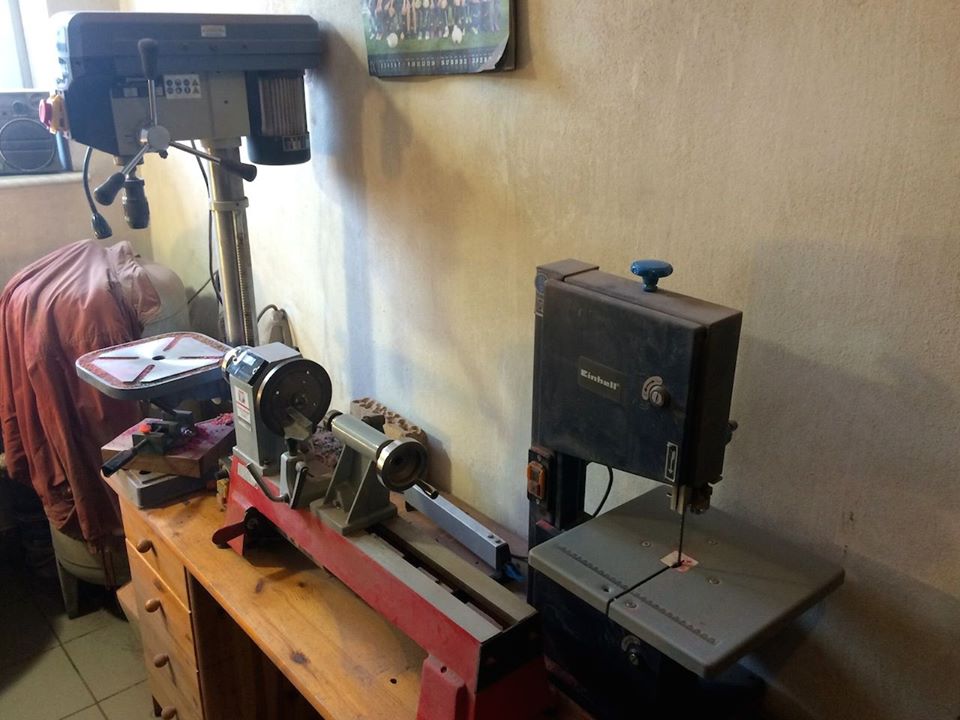 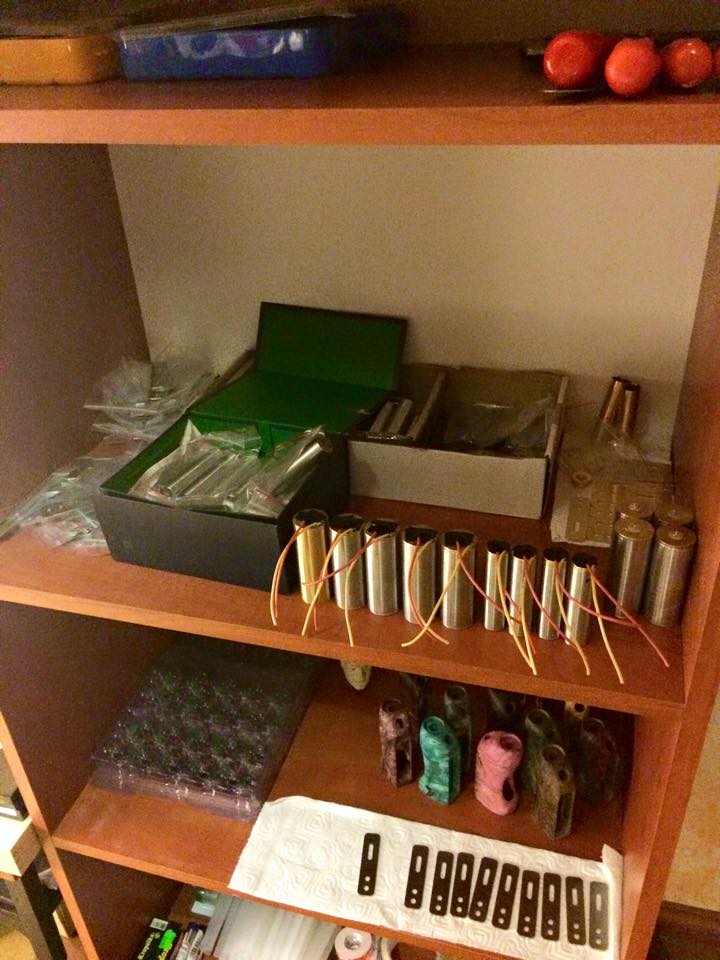 How long does it take to make a mod?
Depending on the model, the time it takes differs. But to make it a bit simpler – it’s usually 3-4 hours to get the wood ready, then it takes about an hour or two to wire everything, put the mod together and test if it works the way I want it to. After that, all that’s left is polishing and the finishing touches which take 30 to 60 minutes usually. So let’s say a working day to get a mod fully made. Sometimes a bit less if I get “in the zone”. I usually prepare all the wood for 5 or 10 units beforehand and then take a day or two to wire them all. 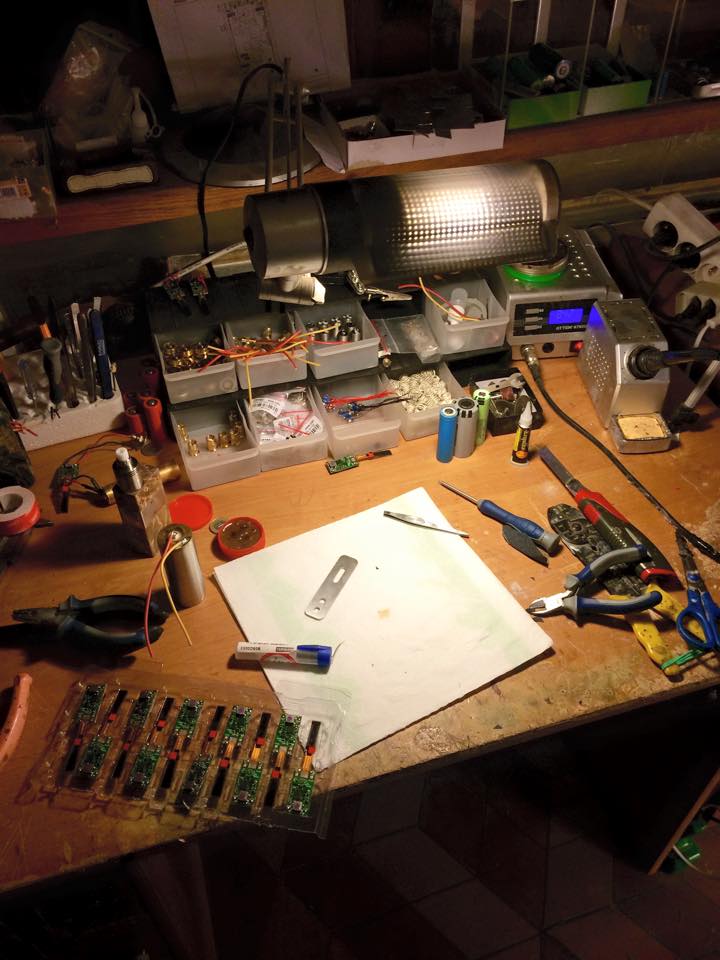 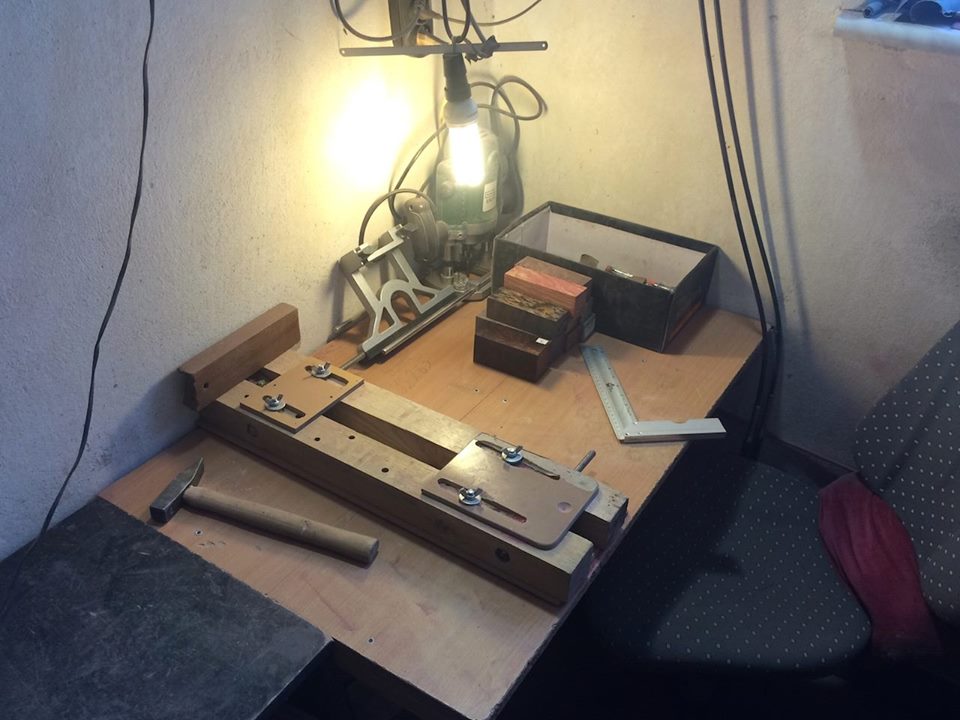 Thank you for speaking with us do you have any shout outs, or last words?
Thank you for having me here. I hope that the community comes together instead of growing apart and that we purge all the drama somehow.
P.S. Mr. McCool says he misses you and love you guys.
Right back at him. Thomas was one of the coolest people we got to meet at Summit Las Vegas. He’s reasonably cool online but he’s way cooler in person. 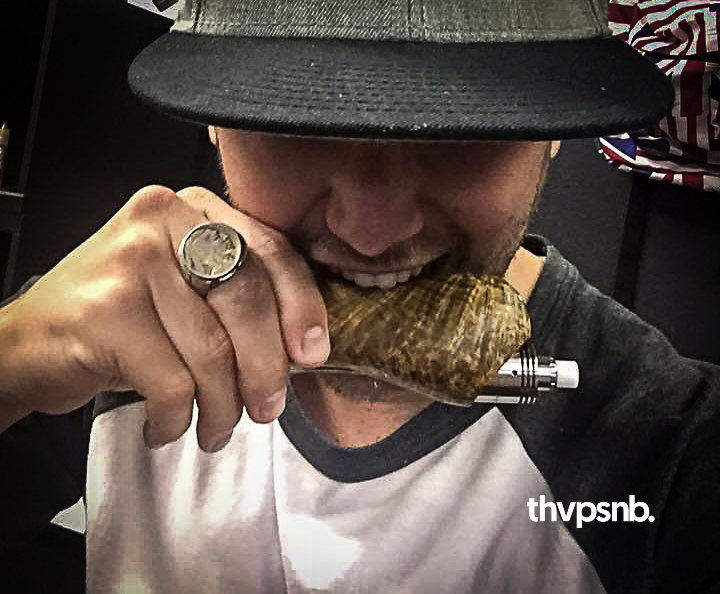 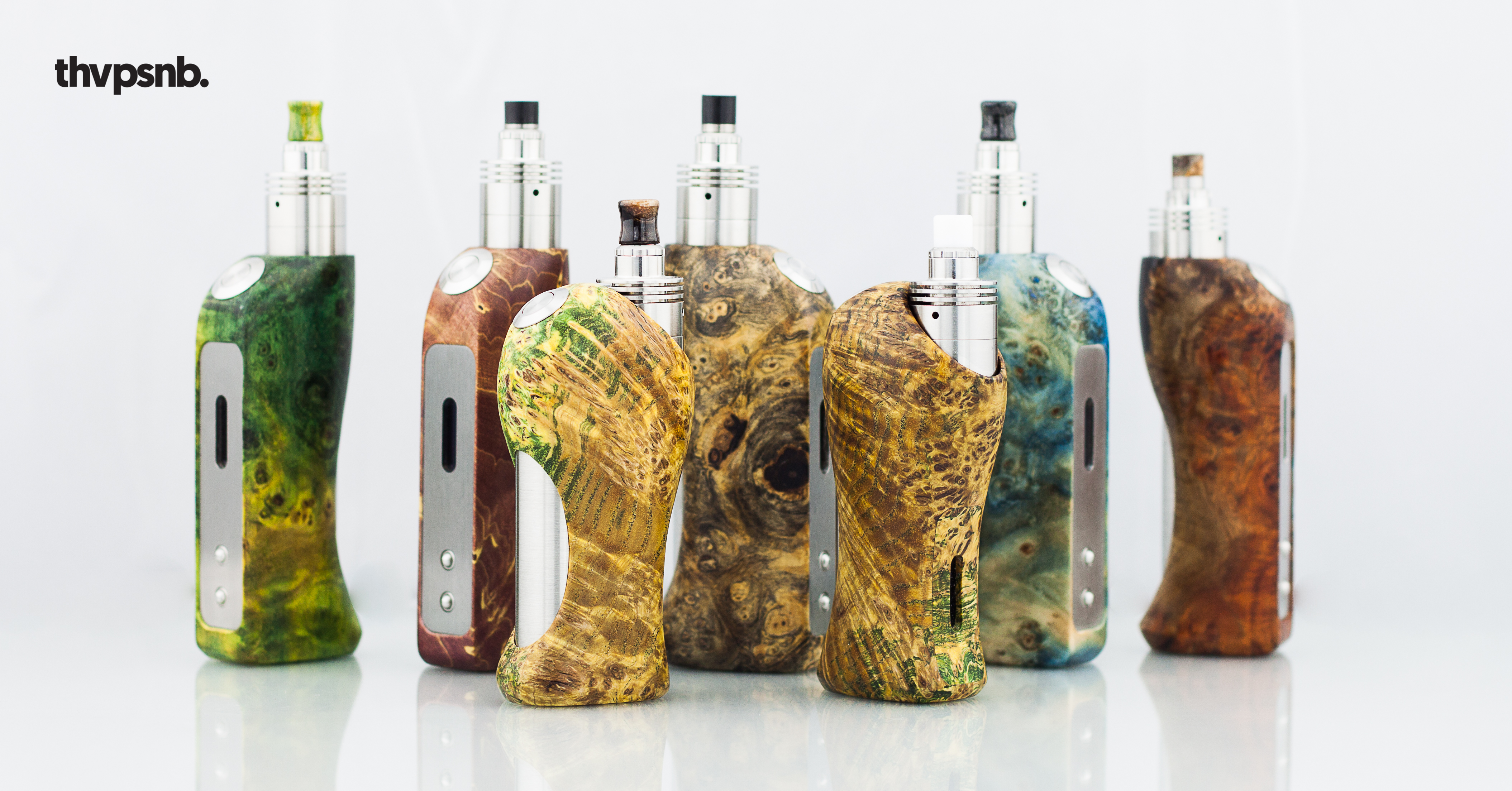